skip to main | skip to sidebar

and another sign of aging, reminding me that the way i look at my classmates and think how old they've become while i've stayed the same, is the way my classmates look at me and think the same.

this weekend, after a bout of gambling (giving reparations to the tribe), four of us ended up at a local strippery. once made famous by nick nolte for hanging out there and stalking a stripper in full mug shot glory, once made more famous by being the only strip club that shared a building with a head start, and once made even more famous by my friend dino who, after attending one evening, asked loudly if it was burn victim night, scooters is low brow local stripper entertainment thirteen glorious miles from dowagiac. the second strip club, 13 miles in a different direction from dowagiac, was shut down last year after being busted for various counts of prostitution, drug peddling, and hiv infections.

at any rate, scooters is entertaining. and cheap. one gets to appreciate a fine variety of body styles and drug addictions. this evening there were about six women, and only one who had recently (perhaps earlier that evening) given birth. we were the only customers.

she spent the rest of the evening trying to ascertain the cause of my stress. it was an urgent mission, i suppose, since i appear so close to death.

i am left to wonder: if a stripper, who makes a living lying to people in a positive way to get money, says i look awful, what do the people i don't pay think.

moustache is hard to spell

so much to report, but before i begin a rash of posts, i figure i should plug my friend elmer's efforts to cure cancer of the manly parts.

i admire people who do charitable things. elmer volunteers, gets involved, cares. every so often i am able to shed some of my own guilt for not being as nice by sending a couple bucks to help one of his causes.

his latest is growing a moustache for movember, the man cancer awareness month of november. he grows a moustache, people give him money. the money goes for prostate cancer research and the bike guy's charity.

check out his moustache and send five or ten bucks to him if you care to. here's the link:
http://bit.ly/30fWEi
if you donate and leave a message that i sent you, i'll match your donation. really.
at 15:27 29 comments:

police on my back 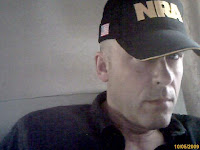 saturday at the minnow, like many saturdays at the minnow--slow to start, then chit chat with employees diminishes as band sets up, people come in. out-of-towners and old people (like my age) first, then finally around midnight the fun crowd, back from weddings or parties or sleep, the people whose saturday evening never begins before a minute into sunday.

so all was well and all was normal except a big group of moronic south bend cops overflowing from the table next to ours. the three biggest ones (between 6'5" and 6'8", all 300+ pounds) were the stupidest, and the stupiest of those a low brow (literally) who took delight in squeezing (not slapping) his friends' ample asses.

they tried to use our table as their garbage can. one leaned over me to tap ashes into our ash tray. i moved it away and told him to get his own ash tray. after convincing him that i was serious, n had to contend with the guy who kept putting his empty beer cans on our table. she kept handing them back to him, telling him that we wern't a dumpster. add profanity.

it went back and forth. they kept trying to taunt us. one giant kept calling me a pussy. i guess standing up to giants is a pussy thing to do in south bend cop world.

anyway, so as a crowd of friends and well wishers formed around our table, the taunts slacked off. then when people were on the dance floor, the ass squeezer came up to me and put his arm on my shoulder. i thought he might be drunk enough to apologize. he continued the taunts.

as we were leaving, i decided to say goodbye. i tapped low brow on the shoulder and told him i hoped he enjoyed our area and that he would enjoy spending more time here in jail. he became irate and asked me how i could say such a thing. "you're drunk, you're stupid, and you're from out of state. i imagine you'll be picked up when you leave."

i don't know my cousins

at the minnow, harlow tells me about some sort of cool web site that i can post stuff i want to get rid of and people will pick it up. she says it takes less than a day to unload a broken washing machine. "just google dowagiac recycle," she says.

that didn't work. then i remembered she called it freecycle. i look that up and find that it is a yahoo group. i go to the group and it tells me i'm not a member.

so i try to use my old yahoo id, bigbadjerryyang, and it no longer exists. i sign up for it again. questions, questions, questions. when i get to the "pick a security question," i'm stumped. i don't know which of my aunts is my favorite. my kids don't have nicknames. i don't have favorite movies longer than a week. i don't know the name of my oldest cousin. i'm fairly certain i have about 100 cousins, a few of whom i met as a child, but we didn't really get close enough to discuss names or ages.

i pick a random question and write licedung as my answer.

then i must choose another security question just in case i forget licedung. this group has one question i can answer: favorite author. i type in the name. "your response cannot be the same as your password," yahoo tells me. my new favorite author is pussmunch.

now i get to retype the squiggly letters. my poor eyesight and lack of art education make this task nearly impossible. three tries, though, and i'm bigbadjerryyang again.

i go to search groups. dowagiac freecycle doesn't exist. i will continue to put crap by the side of the road. it works without a password.
at 13:27 7 comments:

today the rain in the morning was heavy. in the afternoon i spent 45 minutes crying to this song.

we got a sunday paper yesterday. it's been years since i read one. what i was most impressed by were the coupons.

i clipped some, and for the first time in my life decided to save money at the grocery store. i looked forward to saving a dollar on that new deal you can stick in your dryer to get rid of dryer sheets. having a dryer sheet surprise me during the day by peeking out of my pants legs is getting old. if this giant block gets stuck in my pants, i should notice it before arriving at work.

i had five coupons. i gave them all to the check out lady. two beeped correctly. others inspired a strange nervous sigh from the checkout lady. one registered twice. management had to be called. people behind me in line edged forward and began blaming me for all their life's problems. ten minutes later, i ended up having to find two dollars in my pocket to pay for their miscalculation, and the people behind me in line had decided it was all my fault. maybe there's a reason i don't use coupons. i'm still excited, though, about the dryer thing.

oh, and the wrap up of the driveway clothes mystery: the cop finally called and loudly explained that it wasn't as interesting as he had hoped. the guy had been very drunk and didn't remember any of it. the shorts and underwear were his; the shoes belonged to his buddy. he had never heard of my street. he woke up naked in his friend's truck. given that his friend lives about five blocks away, there is still more to this story than anyone will ever know.
at 08:58 6 comments:

so when n first saw the shoes under the truck (she hadn't mistaken them for a skunk), she thought i had run over someone the night before.

that is one of the only possibilities i can cross off the list.

here's the big news, though: now the police are involved. i went out to bag the evidence, and when i was picking up the shorts with a stick, i noticed they were heavy. the fruit of the loom underwear were also a little heavy, but that was due to moistness. the shorts were also moist. had the guy jumped in my pool and then disrobed? no. only the bottom of the shorts and underwear were wet. my guess is urine, but i didn't investigate too thoroughly.

i checked the shorts' pockets and found a pack of cheyenne cigarettes, a lighter, and some change in one pocket. not wet. in the other pocket, i found a wallet. it contained about 150 dollars, many pay check stubs from turf services, and a drivers license. weird became weirder.

i called the police because of the wallet, saying "i have to report something weird." the cop who came agreed it was strange and looked forward to hearing how the guy would explain it. what would cause a guy to leave his clothes, wallet, and last three cigarettes in my driveway? what kind of night could that be?

i explained that the shorts and underwear were moist. "maybe he peed his pants so he left them," i offered.

"i wouldn't leave my shorts if i just pissed myself," the cop said. "maybe if i shit myself, but not just pissing." i nodded.

i interviewed the neighbors who said they saw a shoeless guy walking around about 11:30. he was wearing shorts or boxer shorts or something. but no shoes. maybe he left stuff in my driveway in two shifts--first the shoes, then his shorts.

hopefully, the mystery will soon be solved. the cop promised to call me when he found out something. i sit anxiously.
at 12:06 6 comments:

Ugly Scott
downtown dowagiac, michigan, United States
i have a hard time opening things, but i don't have the foresight to carry a knife. i fear my eyes are growing farther apart and my legs closer together. if i left the room, someone who doesn't know me might say, "who was that nervous guy standing on one leg?"